An Interview with Tiffany Haas! 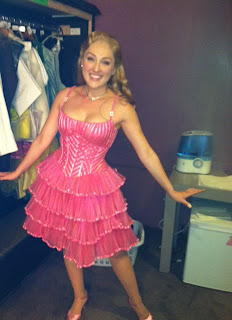 1.Did you see the show before you were a part of it? If so, where did you see it and who were your witches?
Yes, I saw the show when I was in college. I remember exactly where I was sitting in the Gershwin Theater on Broadway. I saw the original company. Little did I know that I would be soon be working with them, performing on that same stage and eventually meeting my husband... all in that same building.


2.What has it been like working with so many different casts of Wicked, and even meeting your husband through the show?
I've performed in the Broadway and 2nd National Tour companies. As the casts evolve and change, so does the energy on stage and the relationships and friendships off stage. Through both companies I've been able to learn some fabulous skills from other actors. I've tried to learn what I can from others and apply those lessons to myself.

3. What was your Broadway debut in WICKED like way back?
I will never forget my Broadway debut. It was a special night. As excited and grateful as I was (and still am), (you need a comma here) it's important to remember that the audience sometimes doesn't know or care. They are happily there to see a great show and most of them do not keep up with the cast comings and goings. As thrilling as it is to perform onstage, THE AUDIENCE is what keeps you grounded and brings you back to reality.4. What was your very first audition for WICKED like? and how did you move through the ranks of Swing, Ensemble, Understudy, and now Leading Lady? Did they always want you to play Glinda, or was it something that occurred gradually?
Kristine Reese (a Nessarose from the 2nd National) and I went to college together in Cincinnati. We heard that auditions were being held in Chicago for Wicked so we decided to go and give it a shot. After singing a song, I was asked to come back and sing Popular and Kristine was asked to sing Defying Gravity. It didn't go any further at that point so we went back to school.

After my college graduation, I moved to NYC... to start pounding the pavement. I was brought in for Wicked numerous times, to try the Glinda material, Nessa material, dance some of the choreography, etc. On about my 7th time auditioning I was cast as the female singer swing on Broadway. After spending about six months in the cast, there was an opening for a Nessarose cover. I auditioned and that was added to my swing position. While I was doing the show and loving it, I was always interested in the character of Glinda. I felt I understood her. After working on some other shows, I was able to come back to Wicked as the ensemble/Glinda understudy. Being a part of the show in different companies and in different roles has helped me to see all of the different ways this story can be told, all the different opinions the characters have, and so on. It helps to make the story, the show, the characters... bigger, if that makes sense. 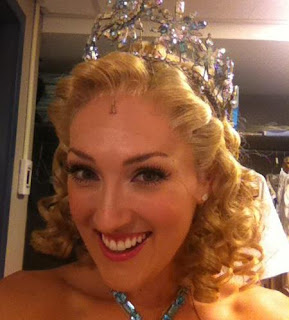 6.Which company has been your favorite to work with?
Oooooo, I could never choose a favorite company!!! The Broadway company means the world to me. They were some of my first friends in NYC and we are still very close to this day. I met my wonderful husband in the company and I learned a lot as a performer through that experience. At the same time, the tour company has become my family. We travel the country together. They see my ups and downs... and I see theirs. And we don't judge!

I was a swing, Nessa cover, ensemble member, Glinda cover and now Glinda with the tour. They have supported me and encouraged me in all of my different positions. And I need to give props to the tour cast and crew. They blow me away. Every few weeks we move to a new venue which can be extremely exhausting. The crew works hard through the night to make the stage and set look fabulous and the cast is able to perform as if they've been in that theater for a year. You'd never know they just completed a 10 hour drive or just flew in from the last city.7. How long has your rehearsal process for Glinda been?
Since I was a part of the show for so long, my rehearsal process for learning Glinda went pretty quickly. However, I feel like I'm constantly growing and evolving with the role... and I hope I continue to do that.8.What is your favorite scene and song in the show?
I'm very girly! I love pink, I love makeup, and I love fashion so naturally I love Popular! I also really love the opening of the show. It takes ALL OF US working together to set the tone for what the audience is about to experience. In the opening, I'm able to make eye contact with almost every cast member on stage and I think that is very important for us in terms of connecting with each other and being reminded that we are all telling this story together. And, I love them and we get to smile at each other.10. Costume?
Oh please don't make me choose! I love everything in Glinda's closet. EVERYTHING!!!11. What would you say really motivates you through two show days?
My motivation on two show days is the audience. And yes, it is tiring... but it's the people in the audience who are coming to our show to hear and see the story being told. It is our job, our duty, and our privilege to tell this story twice in one day.
12. What is the biggest adjustment moving from understudying Glinda to playing her every night?
The biggest adjustment from taking over the role full time is learning to pace myself.

13. What have your favorite mishaps been that may have occurred when you were onstage?
I have a few that are pretty long to type out. Can I get back to you on those??

(My answer, SURE :p)
14. What was your first show as Glinda like? Nessarose?
My first show as Nessa and Glinda were very similar. They were surreal experiences, where you feel a little bit like you've been shot out of a cannon. You have to just keep going and going, trust that you know and where you're supposed to be. Then, before you know it, the curtain comes down and it feels like only ten minutes have passed by.
15.How did you react when you got the call to play full time Glinda?
I screamed into a pillow because my tour roommate, Courtney Iventosch, was sleeping. I was beside myself and I still am and I continue to bring that gratitude on stage with me every night. 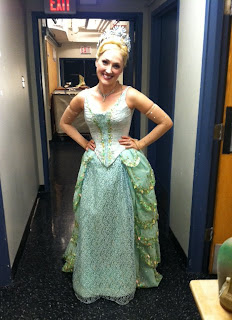 16. What are some of your favorite Stage Door Stories?
While I love and adore every fan who comes to stage door (thank you for your love and support) YES, I do have a favorite stage door story about a little girl in Fresno, CA who blew me away and was absolutely precious. But I must say that it's something between my cast and me and shall remain our little story. I will tell you she was dressed as Elphaba and gave me a pretty hard Q&A about being a performer in Wicked. The details are our little secret! We have to keep some things for ourselves!!

17. Finally, and obviously the most important question, how do you like the name "Gliffany"?
Hmmm, I see... you put Glinda and Tiffany together and you got Gliffany. Very creative work! Thank you so much for your support. I am so honored to be a part of this special show!
Posted by Kyle at 6:10 PM