Eden Espinosa was the original Standby for Elphaba in the Broadway production of Wicked and the third actress to play the role on Broadway, also briefly appearing in the touring company. She originated the role of Elphaba in the Los Angeles company of Wicked in 2007, and returned for the final months in 2008.  She played her final engagement as Elphaba in 2010 in the San Francisco company.  In addition to Wicked, Espinosa originated the title role in the Broadway musical Brooklyn in 2004 and played Maureen in the final Broadway company of Rent (and can be seen on the DVD Rent: Filmed Live on Broadway). Her debut solo album,  Look Around was released in 2012 and can be purchased at edenespinosa.com or on iTunes.  Espinosa answered a few questions regarding Wicked as well as some of her other work.

1. Wicked is known for allowing its actors and actresses bring a lot of themselves to the different roles in the show. However, in being the standby for Idina Menzel, who won the Tony, were you limited in some of the choices you made? If so, how did your Elphaba change from when you were a standby to when you took over the role full-time?
Yes there were some limitations in what I could and couldn’t do. Only because the show was brand new, and they needed to set the tone and the pace of the show. I wasn’t asked to do a carbon copy of Idina, or an imitation by any means. But the timing when it came to music cues, and stuff like that I had to keep consistent with hers. It changed when I took over the role because I was allowed to completely put my own take on the character.

2. How soon after the show came to NYC were the standby tracks for Glinda and Elphaba added? Did you and Laura Bell Bundy ever go on together?
I was hired when the cast and creative team were back from the out of town tryout in San Francisco. I wasn’t supposed to come in until previews, but Idina somehow hurt her knee, so they asked me to come in early and learn the show just in case. Laura Bell Bundy wasn’t hired until sometime in previews. They had a hard time finding a stand by for Glinda at first. Yes we did go on together quite a few times and the first time was quite a big deal, because no one was really sure how the show was going to be perceived without both Idina and Kristin.

3. You have quite a loyal fan base that you have gathered largely through Wicked. Was there a tangible difference between the feelings of having to win an audience over as a standby because Tony Award winner Idina Menzel was out vs. being the 2nd replacement and having a large number of fans of your own?
Yes indeed there was a tangible difference. Even before Idina won the Tony there was. People are coming to the show expecting to see a certain person in a certain role, and when they have to miss a show, it’s disappointing. I totally understand that. I had to win them over, and I felt the energy shift always after “The Wizard and I.” I think the audience realized, that I wasn’t Idina Menzel, (obviously) but that they were still in for a good show.

4. When you finished on Broadway, did you know you'd be opening the company out in Los Angeles? If so, did you know you would be working with Megan Hilty again?
As a matter of fact I did. Megan was leaving the Broadway company before me, as she was there before me. So right before she was leaving, we were told by the producers that they wanted us to open the Los Angeles company. We were both so excited!

5. Besides the 10th Anniversary performance, have you been back to see the show since your departure in 2010 from San Francisco?
-The only other time I saw the show, besides the 10th, was when I went to see my good friend Tiffany Haas go on as Glinda.

6. How did the offer for closing Rent on Broadway come about? What was the biggest difference between closing a mega-musical on Broadway and closing a mega-musical in Los Angeles?
From what I heard, David Stone (producer Wicked, Next to Normal) was in DC with Michael Greif and N2N, and they were talking about the closing cast of RENT and my name came up. The rest is history. The difference between closing Rent on broadway and closing Wicked in LA was just the history behind RENT. 12 years on broadway. I was obsessed with the show from such a young age. So to be the last Maureen on Broadway plus to have it filmed by Sony was literally a dream come true.

7. Your album, "Look Around" is really amazing. You have a little bit ofWicked, a little bit of Rent, and a little bit of Brooklyn. But you also have songs from other shows that show you and your vocal and acting abilities in a whole new light. What song on the album means the most to you?
Thank you so much! I’m very proud of the album. There are two songs that means the most to me. The first is “One Song Glory.” This was the first song that was chosen and arranged for the album. To be honest I wasn’t sold on the idea of doing an entire album of Broadway songs, but when I heard what Joseph Abate did with “One Song Glory” I was bought it, hook line and sinker! It was also the last song we recorded. The other is “Look Around” simply because I love the message also it reminds me of my dear friend John Bisom, who is no longer with us. The song and the album are dedicated to him.

8. What were some of the feelings going through your head when you were sitting in the Gershwin Theatre on October 30, 2013 for the 10th Anniversary performance of Wicked?
That entire night was such an amazing, surreal, emotional roller coaster. Some of my thoughts were…” how amazing that you have been a part of this wonderful piece of musical theater history” “stop crying Eden!” “I don’t know what my life would be like if Wicked hadn’t of come into it”

9. Finally, what can we expect from you in the future? Another album? More Broadway? TV/Film?
The future is the great unknown. But definitely another album. We are already gathering ideas and material. I would love to do more Broadway. I audition all the time. I hope the right project comes along soon that I’m perfect for. I would also love to do some TV/FILM, and I audition for it all the time. Just a matter of the right role coming along at the right time. Keep your fingers crossed for me!!!! 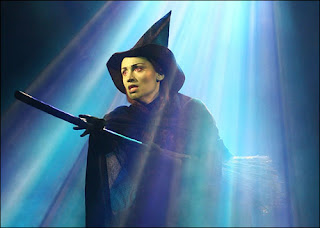