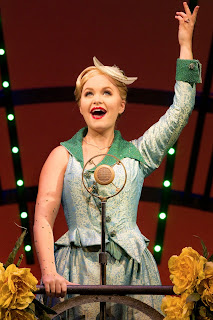 Amanda Jane Cooper and Emily Koch will be Broadway's next set of Wicked witches!  Cooper returns to the show after playing the role of Glinda on Wicked's First National Tour in 2011.  Koch returns to the tour, on which she previously served as standby, directly from the Broadway company of Wicked.

A CMU graduate, Cooper has appeared in Letters for Algeria, BUNKED! A New Musical, What the Butler Saw, and Bye Bye Birdie.  She has also appeared on your TV on hit shows on 'Glee,' 'Jessie,' (Disney Channel), 'Bones' and 'Masters of Sex.'

Joining Cooper and Koch on tour will be recent Penn State graduate Sam Seferian as Boq, and Megan Masako Haley as Nessarose.  All four will begin performances on Wednesday, December 9th.
Posted by Kyle at 3:51 PM